I wish I was able to say that the move to Hackney was fraught with hilarious hiccups and tearful pleas to an eccentric old man named Tete-Raki to move his collection of glass pick-up sticks and jade marbles from the path of my rolling luggage juggernaut. I predicted slanty rain and a slow ´leak´ in my luggage that would leave a Hansel and Gretel trail of plastic orange shoes, purple pashminas and Kinder-Surprise toys along Euston Road. But the move actually went quite smoothly. Even though I had banned myself from TopShop and Spitalfields Market until I was earning more than lint and shoelaces, I still managed to accumulate a lot of STUFF, and it all had to go.
Kyle loaded 3/4 of my STUFF onto his bike and rode all the way to the new place (amazing, I know. My junk probably weighed more than he does), leaving me with just my big black suitcase to take on the bus. No slanty rain, no encounters with Tete-Raki, not even an impatient busdriver. England was in a generous mood.
The New Pad (I hate it when people call houses ´pads´...)
The cunning reader will recall that I was less than impressed with the Fitzrovia flat. The new place is about 20 rungs up on the cleanliness ladder, and apart from a well-stocked kitchen, the place is also well stocked with people. I am one of seven. And, thank God, all six flatmates are more likely to share and clean than eat my mushrooms and leave Kosciouszkos of dishes in the sink. AND, bonus of bonuses, all except Kyle have English as a second language, so in exchange for helping some of them with my mother tongue, I´m learning snippets of French, Spanish and Portuguese. I brought home a beautiful leaf from Victoria Park and can now say ´C´est un jolie feuille´. Sure to come in handy in Montmarte, I know (along with ´grille pain´ (toaster), ´tortue´(turtle) and ´briquet´(lighter)).
(As a side note, I may be starting French lessons soon with a multi-lingual prodigy whose first word was ´rhinoceros´ and who apparently dances like an octopus: Jean-Marc. His fee is a pint an hour - not bad! Incidentally, he too has a blog, which you may indulge in here: http://jeanmarcknoll.blogspot.com/.)
More on the people later, but ´the pad´ is 3 storeys, 4 bedrooms, 2 bathrooms, 1 kitchen/living area, and a courtyard out the back that, I regret to tell you, is densely populated with garden gnomes, terracotta squirrels and a pig and an owl pushing wheelbarrows. People at home may remember the ´Great Garden Gnome Kidnapping´of 2007, where I successfully relocated the $2 garden gnome Dad received as a ´joke´ Christmas gift yet somehow managed to make a home for itself beneath our Silky Oak. I am not a gnome fan, in general, but our courtyard is so kitsch and overdone I can´t help but love it.

Exploring the ´hood
My little Lonely Planet London guide reported that, a few years back, a popular TV show named Hackney "the worst place to live in the UK". It also said, however, that this caused a huge backlash amongst Hackneyens (ites? siders? a-thons?), who pooled together their resources and launched an ´I Love Hackney´campaign, complete with t-shirts, bags, bumper stickers and mugs.
Now, it´s early days yet, but Hackney isn´t half bad! On a rare sunny Saturday I went for a long walk with Kyle so we could discover Hackney´s nooks, crannies and orange leg-warmers. A few highlights:
- Bohemia Cafe: live jazz and salsa music every Sunday night
- Hackney Empire: theatre, music and a bar with quiz nights on Tuesdays (they also do the auditions for ´Britain´s Got Talent´ here)
- Victoria Park and Hackney Marshes: my new running tracks
- Marks and Spencers Food: for when we feel like spending £3 for a banana
- Primark: for when we only have £1 left but need 3 t-shirts, a pair of ballet flats, a new scarf, a red cushion, vanilla-scented body wash, new underwear and 5 pairs of 40 denier stockings.
- And, something I never really expected to see in London: 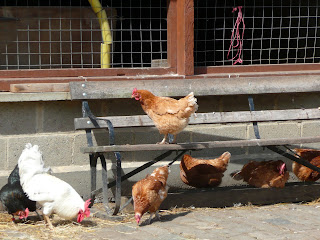 Hackney has a city farm. It´s mainly for kids, of course, but at least if I miss that thrilling feeling of interconnectedness with "Nature" that pervaded my life back home, I´ll know where to go. If the cityscape feels like it´s closing in on me, hurling gum wrappers and neon signs at my ankles, if the bendy buses and cyclists collude to splash oceans of oil-streaked water on my innocent suede shoes, if the echoey soundtrack of five-hundred pairs of heels stomping down narrow tube tunnels starts to invade my frazzled mind, I can go look at a goat and know that it´ll all be okay.
Perhaps the best part of living in Hackney is that it´s so close to my favourite part of London so far: Shoreditch! When I made it to Brick Lane and saw the hole-in-the-wall pubs, the coffee shops with vintage lounges and Indian lamps and Hookahs to smoke out the front; the curry houses, intricate street art and the all-embracing fashion experiments of passers-by (a girl sitting near me right now is wearing a black bowler hat, white Ray-Bans, a red and black polka dot shirt tucked into a ruffled white and red polka dot mini skirt, black suspenders with silver buckles, black thigh-high socks, platform saddle shoes, dangly silver star earrings and plenty of multicoloured bangles), I knew I made the right decision moving East. There´s a pub on the corner of Brick Lane - Casa Blue - that has a queen-sized bunk-bed covered in fairy lights in one of the rooms.
The Sun is the Underdog in England
My first music festival in England was a free one in Victoria Park called ´Love Music Hate Racism´. It was the first festival I´d been to where the grass was plush and plentiful (the kind you walk on, kiddies. But come to think of it, the other kind was plush and plentiful too), but also the first festival I´d been to where the wind was a bratty toddler, making my £4 umbrella bob and twist and buckle like a spinning top when it´s almost used all of its spin juices and starts going all skewiff and falling off the table. And the rain. God, the rain.
I went with two Marcs (one a Mexican vegetarian base player and the other my potential future French tutor) and it really was just a day to hang out and pay too much for alcohol and fajitas because the sound quality was pretty bad. The lineup was great: Hard-Fi and the Good the Bad and the Queen played, and Fyfe Dangerfield from the Guillemots did a cool cover of Mr Springsteen´s ´Dancing in the Dark´, but for me the best part of the day was at about 5pm, when the underdog sun finally overthrew the tyrannical cloud government and proclaimed that there shall be free t-shirts and cupcakes for everyone. I don´t think I´ve ever witnessed such a communal outpouring of excitement over the sun before. Thousands of people cheered, turned their faces to the sky, stretched up their arms and danced. It was such an instinctive reaction. I cheered and then laughed because, back home, at Big Day Outs for example, we´re more likely to cheer when the rain arrives, and stretch our hands out for the precious icy droplets that bands might throw from their water bottles.
Posted by Sarah at 10:09

i'm sure it was just a typo but i think you mean Sir Springsteen.

Rapier wit married to such fluid and elegant writing. Bravo!

Hey Sazzo, I just read all this and think I hope no one expects this kind of thing from me when i get over there! what a joke that would be!

P.s. I wanna learn french too!

Oh I realise that wasn't very clear I mean the way you write about stuff. I can't write goodly like you!