Not so Rum and Raisin after all...

For those of you who have been following this blog as closely as a dog’s eyes follow a piece of camembert cheese from the cutting board to the cracker (or for those of you who are so technologically savvy you can perform the impossible feat of scrolling down), you will know that in Paris I felt sort of ‘out of place’. I was a Bubble-o-Bill in a land of Rum and Raisin Gelato.

Once in Brussels I was expecting more of the same. I thought I would meet some Tiramisu or possibly Pistachio flavoured people, so it came as a surprise that my Couchsurfing host turned out to be what the French might call ‘une Bulle-de-Guillaume’*.

It only took a quick scan of his bookshelf for me to realise that, although we’re all made in different factories with different ingredients and different lazy managers who sometimes put strawberry labels on people who are clearly double-chocolate-fudge crunch, deep down, we’re all made out of ice-cream.

This analogy is rapidly falling off the rails, so I will stop. Julien’s bookshelf was full of all my favourite books (only with French titles like Sur la Route) and I had only been there an hour before we were listening to John Coltrane and quoting Monty Python sketches. If I had known that it was possible to say ‘This parrot is definitely deceased!’ to a Frenchman and have them laugh and throw in ‘I’m Brian and so is my wife’, I may have found the people in those Parisian cafés a little less impenetrable.

Julien (who also has a blog, as all of my new friends seem to do (if you speak French you can access it here: http://www.oeuillet.be/)) and his girlfriend Salomé took me to second-hand bookstores, introduced me to French comics (Arthur De Pins is a new favourite), led me around the Tin-Tin bedecked streets of Brussels, had tea and philosophical discussions with me in a tiny pub off the Grand Place, and let me indulge in one of my favourite foreign destinations: the supermarket!

But the icing on this tub of ice-cream was a discovery I made in their flat on the first night I arrived. Attached to their tiny baby-blue TV was an object out of my own childhood: an integral part of my upbringing: the source of my renowned ability to jump over turtles and collect coins with my head: a Super Nintendo. And, if it wasn’t already enough that they owned this grey box of dreams, they also had the game that I probably spent more time on than my honours thesis: Mario Kart.

And so it was that in a little flat above a Brazilian shop in central Brussels, I played 26 rounds of Mario Kart battle-mode with a Monty-Python loving Frenchman.

At the risk of sounding like a marketing ponce for Couchsurfing, I am happy that there is a website out there that can put you in touch with people like this. 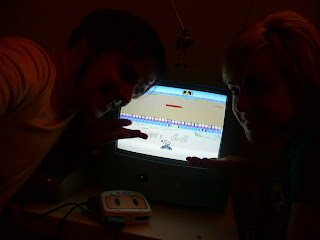 We called it a draw at 13-13 (apologies for the bad photo quality). 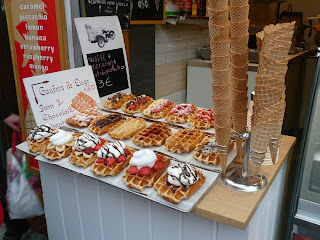 *many thanks to my personal translating service, JMRAK, for providing this one.