There are two types of people in the world (I hate it when people start things like this – with the ‘two categories’ that always end up with more holes poked in them than a kitchen colander because they forgot about the people who prefer ferrets to cats or dogs, or the people who prefer Samurai Pizza Cats to Tintin or Asterix – but I am using it anyway. The lure of the cliché is pulling me in!):

Sadly, on a recent weekend trip to Salzburg, a person of the first variety became irretrievably entangled with two people of the second variety. Well, I should say ‘sadly’ for him, because for us it was fantastic (even if it was cheesier than the Brady Bunch family sitting down for Brie, Gruyère and Double Gloucester sandwiches served on a bed of grated Parmesan).

My lovely boyfriend Marc had, rather short-sightedly (but incredibly generously), decided to book a surprise trip for me and my sister Laura to the land of Mozart, strudels and, most importantly, the snow-topped mountains that tend to sing thousand-year-old songs underneath Julie Andrews’s nimble feet: Austria. When the mystery location was revealed at Stansted Airport, we launched into ‘I Have Confidence’ and literally didn’t stop singing for the next three days. I ate my muesli in the pauses between verses of ‘So Long, Farewell’ and kept everyone up all night with my somnambulant ‘Adelweiss’ (I just wanted an excuse to use the word ‘somnambulant’ there…). The one song we didn’t sing to an early grave was ‘The Lonely Goat Herd’, because no one apart from the good lady herself can pull that one off.

We arrived on a Friday morning, and our Sound of Music tour wasn’t until the Saturday, so that gave us the Friday to wander around Salzburg discovering the Salzburgers’ homage to their musical prodigy in the form of chocolate balls filled with marzipan and nougat (I’m not sure how chocolate immortalisation really connects with musical genius, but gold-wrapped Mozart balls are available in every second store in the city. Apparently the silver ones, which are harder to find, are the ‘originals’), the cute little tunnels with names that have very different meanings in English/Yiddish (see picture below), errant apostrophes aplenty (see other picture below), and plenty a beer-hall serving schnitzels and sachertortes. 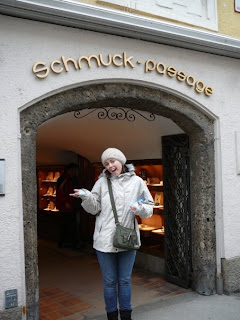 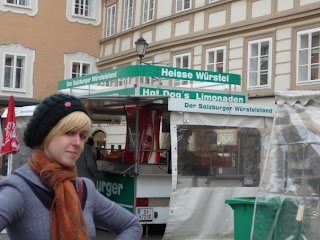 The Hot Dog's what?

As a side-note, I have learned from Marc that German is a language where you can smush all the ‘qualifiers’ together into one long word, so you end up with signs like this: 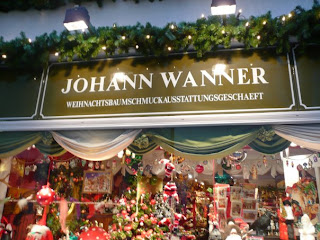 That long word means something like ‘Store that sells Christmas balls and gifts and related paraphernalia’. Most of the cafés we went to assumed that you could do the same thing in English, so you would end up menus boasting ‘applestrudelwhippedcream’ or ‘hotchocolatemarshmallowwhippedcream’.

After laughing at the ‘No Kangaroos in Austria’ t-shirts and clocks and pencil sharpeners and erasers and underwear and thimbles and teapots, and scratching our heads when we learned that Salzburg’s ‘New Town’ area is actually older than colonised Australia, it was time to stop wasting our time with shameless touristy knickknacks and focus on eating our deliciously cheesy Sound of Music sandwich.

If you are a person of the first variety, the following will make perfect sense to you. Everything became a ‘the’. We saw the gazebo, the house, the graveyard, the mountains, the gardens, the bridge, the Abbey and the Church where Maria and Georg were married. With each new sighting of something familiar, me and Laura set off on a long chain of ‘And this is the part where…’ or ‘And she does this then, and then Gretl says that, and oh yeah I forgot about that bit when Rolf is throwing stones at the window! And what was the point in the pink lemonade?’ Marc was doubtless listening to Cannibal Corpse and wondering why in the name of Rodgers and Hammerstein he didn’t arrange a trip to Vladivostok instead.

Of course I know admitting to a fondness for The Sound of Music automatically makes me fall a few rungs on the ladder-of-enviable-coolness-and-flawless-taste (although people who appreciate these guys might disagree), as it is so saccharine it would make a pot of melted jelly babies coated in white chocolate, dusted with icing sugar and served with a side of millefeuille and grape bubble-tape taste bitter in comparison, there is still something interesting about visiting a place whose landscape you have known inside out and backwards since you were six. I hope this doesn’t sound too sentimental, but the movies I watched when I was little seem so much more ‘full’ than the ones I watch now. Not because they were ‘better’, but because I used to watch the same movies so much that I knew the layouts of houses, the patterns on the dresses of the drop-in characters and the exact intonation of the line, ‘Well how about that, Mr Doubting Mustafa?’ I think kids tend to put themselves ‘in’ movies, so seeing the gazebo and the fountain and the house – all completely unchanged from 1965 – was almost like déjà vu. 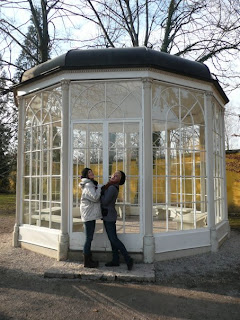 Two pistachios at the gazebo

I guess Marc, as a person of the first variety, can only really understand how we felt when he becomes a person of the second variety in relation to a different movie. Perhaps when he re-enacts scenes from ‘Anchorman’ in San Diego, while I wonder what’s so exciting about a dog sniffing a wheel of cheese…