To all who have commented on past posts: I haven’t figured out how to respond to each comment individually, but I do appreciate them all. One thing though, if you’re using a pseudonym, let me know who you are!

Portobello Road Market vs. Camden Market: a probing comparison by a drenched amateur

So here it is: the hard-hitting comparison I’ve been storing to blow your sombreros off with until now. All very thoroughly researched through a triangulation of qualitative and quantitative methods, with all possible bias or subjectivity swept under the coffee table and many references to Foucault’s The Hermeneutics of the Subject: Lectures at the College de France 1981-1982 and Latour’s Pandora’s Hope: Essays on the Reality of Science Studies to add more pomp and gravitas. The result will be up to Foucault, Latour and YOU. In the words of Mr. Moran: Vote now for your favourite thing and you too, could win a thing.

Portobello Road Market is very classy and pretty, but so busy you are forced to spend longer contemplating antique toaster-handles than you ordinarily would. It is mainly antiques, produce stalls, vintage clothes, photos and prints and touristy bric-a-brac stalls. My favourite thing there wasn’t the London bus matchbox cars or the £50 diamante necklaces, but this:

At an intersection near the produce stalls, there was a bald old man sitting on a blue crate with a plump Jack Russell terrier lying across his shoulders. As I was walking by, he lifted up his styrofoam cup of coffee and, ever so gently, with all the relaxed confidence of a well-practiced routine that was not by any means too gag-inducing for the ogling, ambling masses, tipped it towards the dog’s lips. The dog took a few licks and then the man lowered the cup and had a few gulps himself. That little scene almost won Notting Hill the much-coveted ‘Cool and Eccentric Market of the Fortnight’ sash, but ultimately it was Camden Market that took out that particular title. 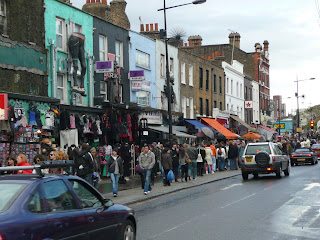 Camden Market is much more sprawling and unexpected than Portobello Road. It has mass produced everything (along with one-off knick-knackery). It has shelves of multicoloured bongs and lego-man necklaces and fluro lyrca rave outfits and overpriced vintage dresses and space-invader print Doc Martens and narrow laneways with blue fairy lights and couches on the ceiling, and it smells of curry and coffee and chilli and strawberry crepes. Of course the God of intermittent rainfall and diagonal breezes (let’s call him Bernard) kept waving his rainy sceptre, so my umbrella was going up and down and inside out and into people’s temples for most of the day, but I still thought Camden Market deserved to have my ‘Rad Market of the Quarter’ badge pinned to its lapel (alongside the fortnightly sash). 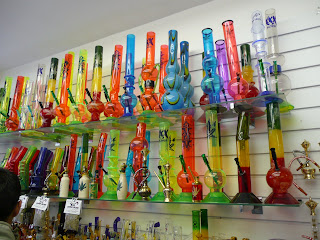 - Small thing #1: the apples here, without a dollop of exaggeration or embellishment, are all perfect 100% of the time. No dodgy Braeburns in London. No floury Pink Ladies. No worm-infested Royal Galas. Nothing but crisp, fizzy, juicy baubles of joy.

- Small thing #2: the buskers here, with possibly a teaspoon of exaggeration this time, are much more talented than the bizarre acts that clog up Devonshire St Tunnel and Circular Quay back home (a certain bell-ringing man in a donkey suit comes to mind). Kudos to the saxophonist playing Bésame Mucho at St Paul’s tube the other day.

The slow-walking, video-camera swinging, tube-clogging masses of tourists everywhere get a bit much sometimes. Oxford Street is a bottleneck of teenagers. Portobello Road is full of Italians who don’t know to move out of the middle of the road when you’re having an arm-flailing discussion. Americans on the tube complain loudly about the old people hogging the seats. I roll my eyes when I see someone taking a photo of the BT tower, but as I squirm my way through every congested sidewalk, I realise that I am part of the problem.


A Sweet-Potato Wedge of Comedy

I’ve been to a fair few comedy evenings since I’ve been here and they’ve all been fantastic. Surreal, over-the-top, full of silly voices and conveyor belts of UK accents. The Pleasance Theatre (http://www.pleasance.co.uk/islington) in Islington, apart from being a warm and aesthetically pleasing venue in itself (full of black-framed photos, bright and silly posters; vintage lounges, wooden staircases and well-clad individuals), hosted ‘Sketchatron’ on April 11, and there were three comedy duos I will now be following closely. Tommy and the Weeks are witty and silly and deliciously inappropriate, Dmitry and Vassily do impressive improv in flawless Russian accents, and Colin and Fergus take up where Monty Python left off (and, even better, they build on it). I remember one line by Fergus, who introduced his partner with a dead-pan staccato voice like John Cleese in ‘authoritarian’ mode: “I’ve been married twice. This is my wife Sarah, who is quiet and clean. Then there is my ex-wife Philippa, who is beautiful… and died.”

Some of these duos are bound to be at the Edinburgh Fringe Festival in August, which is grand, because I am bound to be there too.

About 1 minute’s walk from the Fitzrovia Flat, tucked away under a floral-print doona on quiet Great Titchfield Street, is a little place with bright red walls and Danish sweets that serves THE BEST COFFEE IN LONDON. They use Monmouth Coffee beans and they have soy milk. Their coffee mugs, instead of having ‘traditional’ handles, have these round protuberances shaped like a coffee tamp (or a motorbike handle, for those of you who didn’t spend too much of your lives practicing the subtle art of barista-ing and hence are happily unacquainted with coffee tamps). It’s called Scandinavian Kitchen and the blackboard out the front has a daily Danish quip (like ‘It’s Viking Good’. I didn’t say they were clever quips…). The other day when I was in there, they were playing Bruce Springsteen’s The Rising. It didn’t really ‘fit’ amongst the assorted Scandinavian sweets, breads and cheeses, but Mr. Springsteen’s voice reminds me of my Dad, so that was the icing on the triple-layer chocolate truffle cake. 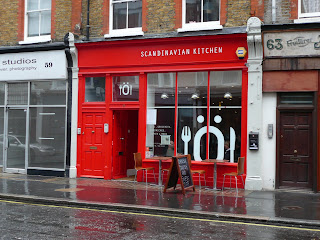 Coming up in Proustian Post Cinq: The move from Fitzrovia to Hackney.
Posted by Sarah at 08:23

my dogs drink coffee too. wait till i tell them how cool they are.

the frontage of the scandinavian kitchen looks so cool.