Instead of travel tales, some nonsense about a rebellious paver...

Around the corner from my house there is a piece of pavement. It looks just like any other paver* in this area: grey and rectangular, with a black smudge of old gum on its back. But this paver is different. This paver uses its ‘ordinary’ looks to disguise a mischievous temperament. This paver is tired of being stepped upon and has discovered a way to wreak revenge.

He enjoys doing it (you can tell from the bricky ‘kerplunk’ of his laugh) because it is both immediately destructive and yet so ‘tiny’ an irritation that the victim almost immediately forgets about it. Looking identical to his innocent cousins (who adhere to the paver status quo), he is able to outwit the same set of forgetful feet again and again.

On rainy days, when most pavers close their eyes, put on a grim face and let the water drops fall on them and then roll away like clear marbles, he wriggles and shimmies between his neighbours, opening up his borders and letting the rain tickle his sides and work its way down to fill the grubby pots and pans he keeps underneath his belly.

Once the rain stops and the other pavers get on with the job of waiting to be stepped on, he stops wriggling and tries to blend in. He pretends that he is waiting to service a suede-booted foot with a compliant solidity, but really he is quietly manoeuvring a series of pumps and spouts into his pots and pans.

He is well practised. Even his neighbours can’t tell that he’s doing anything, and the approaching suede boots (or sometimes the ballet-flats with inadequate border patrol) assume that this upcoming patch of pavers will exercise their civil service as quietly and uncomplainingly as the last.

He is also helped by his position. Somehow he was able, years ago, to negotiate his way into the enviable (yet long-winded) real-estate position of ‘Central Paver on Well-Frequented Corner of Street Leading to/from Tube Station’. He is popular because of this location – like an all-you-can-eat dinner buffet at a tiny airport where the only other option is cold sandwiches of questionable freshness at a newsagent.

So the suede boots and under-prepared ballet flats tramp his way. He is the most convenient option.

He sees them coming and readies himself. He stiffens his back and lowers his hand to the pumps in the pots. The feet clomp closer, stepping without a care in the world across the obliging grey backs of his cousins. Once they are two pavers away, he sucks in his breath, swirls his stockpile of water marbles and then, when the foot lands on him, he releases his breath, opens all of his borders and squeezes his pumps, spurting a backwards waterfall of brown liquid up into the air. His technique is so well perfected that this waterfall never fails to perform three or four quick somersaults before landing – with the same inevitability that Wednesday follows Tuesday or regret follows a rampant Terry’s Chocolate Orange binge – squarely on the unsuspecting shoe.

He realeases his kerplunk of a laugh at the same time: his pavery equivalent of a criminal’s calling card: letting those suede shoes know they’ve been had yet again.

It echoes in the ears of the boots, and they curse their rickety memory and vow to themselves that next time, next time, they will remember this anarchist paver and re-route their steps.

But here they come again, on their way home from the shops, and the paver stiffens his back, shakes his head and chuckles.


*Apparently the British don’t say ‘paver’. I have had arguments over whether this word can mean ‘a piece of pavement’ alongside ‘one who paves’. Well, one argument. According to the infallible yourdictionary.com, both meanings are correct, so I’m going to stick with my colonial language perversions and sprinkle ‘pavers’ all over this blog entry with my giant pavery salt-shaker. Paver.
Posted by Sarah at 09:29 2 comments:

The day I arrived in Brussels it was dimanche sans voitures (Sunday without cars). I had been told about this before arriving but had forgotten about it, so when I was walking from Brussels Midi station to the city itself, everything seemed a little sedated. A few kids sailed by on bikes, the occasional bell tinkled and I saw a police car cruise down a quiet street: lights on, sirens off.

I started to get the feeling that maybe visiting Paris first was a mistake – that it was like eating the tastiest thing on my dinner plate first and then realising that all I had left now was broccoli (or Brussels-sprouts, even. Ha. I’m sure you couldn’t see that one coming!). But I hadn’t even reached the city centre yet, so I decided to withhold my broccoli pronouncements until later on. I decided that maybe once I’d cracked Brussels’ crème brulée lid with my teaspoon, I would see warm melting raspberries and smooth chocolate cake batter.

I was walking down Avenue de Stalingrad, heading for the Grand Place, when in the distance I heard the unmistakable promise of a melting raspberry: a rumbling of drums, a far-off trumpet. It was in the opposite direction to where I was headed, but there’s something about faraway drums that makes you feel you’re missing out on something big, so I turned down a side-street towards them, getting my teaspoon ready.

I was not disappointed. The crème brulée lid shattered into thousands of delicious lego pieces and the chocolate cake batter was thick and flowing. A band of 12 young people dressed in a mixture of black Cossack hats, fluoro yellow shorts, funky indie suits and black suspenders were dancing down the street, playing the liveliest, most enthusiastic and unabashedly happy music I have ever heard. There were drums, trumpets, accordions, saxophones, clarinets, trombones and one big, moody tuba. A trail of grinning people were following along behind them, and they lured us all into a big auditorium where they clambered their way up onto the stage.

The music was fantastic – it was fast-paced and. They took turns having solos and the rest of the band would creep up around them, staring at them in ‘mock’ curiousity and awe. The accordion player kept doing jumping splits like a rock star, the lead trumpet player looked like the kind of guy who would make embarrassing but witty speeches at wedding receptions, and the notes bounced comically along like a multicoloured beachball at a football match. 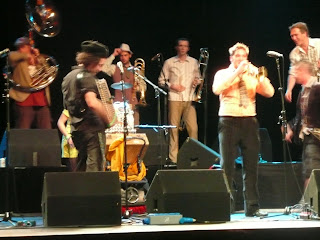 The best photo I could manage, unfortunately

They played for about an hour, and Brussels went from a broccoli side-dish to a place where people were ecstatic to be alive.

Later on in the same day, after discovering where all the tourists were hiding (they’re all around the Mannekin-Pis, which, truth be told, is not all that exciting. They dress him up in little outfits and it smacks sharply of people who put clothes on their pets…) and that a day without cars results in a day swarming with bikes (to the extent that crossing the road requires the skill and dexterity of the 2006 ‘Frogger’ champion), I heard a different kind of music. 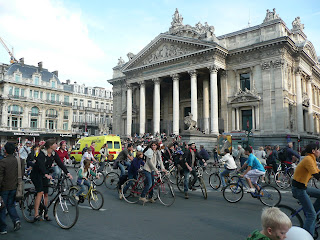 Near Bourse/Beurs station, there was a DJ playing emotional, intense and incredibly loud piano recordings from the top of an abandoned building. I stopped to have a sandwich at a little Dutch café and watched the hodge-podge of Brussels folk float by. There were people on rollerskates, a guy on a penny-farthing, and at one point a man in a medieval peasant outfit trotted by on a horse. As I was sitting there a group of what looked like African American rappers flounced by – wearing oversized white jerseys, straight-rimmed caps, silver sunglasses and straight faces, but they were speaking in French and had the soundtrack of Chopin’s ADHD cousin behind them. 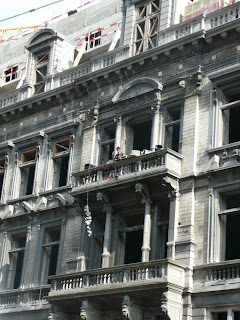 The DJ near Bourse/Beurs
Here’s to discovering that, even though places aren’t Paris, that doesn’t necessarily make them broccoli.

P.S. Obviously I’ve been having trouble with the speed of my updates lately. I hope you’ll bear with me if I intersperse everyday junk with actual travel stories. Instead of writing about Amsterdam, which I was meant to be doing, I wrote about a rebellious piece of pavement near my flat. It isn’t because I don’t want to write about Amsterdam – it’s just that pieces of pavement keep getting in the way…
Posted by Sarah at 01:31 6 comments: