So I’ve decided that the people at home can’t get rid of my long-windedness that easily, and have started this fittingly titled little blog, which will begin not from this café in Farringdon, but from home, and a few of the silly tit-bits and whatnots that happened along the way.

My Last Will and Testament

In the last couple of weeks, I noticed that Laura and Helen were beginning to treat me as if I was an old lady about to cark it. They’d see my open closet, sidle up to me and with hushed, almost guilty tones they’d say: ‘So… what are you going to do with this when you’re… gone?’ It was as if they were waiting for me to shuffle off this mortal coil so they could reap my worldly goods. Unfortunately for them, I did not have much to bequeath. My ‘worldly goods’ consist of various packets of muesli, a coffee plunger and half a car that you have to turn the air conditioner off when you approach a small rise in the road just to be sure you’ll reach the top. Well, there is my extensive CD collection. Perhaps I could have distributed it amongst my ‘loved ones’ left behind, and which CD you got would indicate how much you meant to me. Whoever got ‘In the Aeroplane Over the Sea’ could consider themselves pretty top-notch on Sarah’s list of favourite people.

Thankfully the packing was undertaken more by Mum than by me. I knew that I’d probably be paid in corn-chips and dust for my first job over here, so I wanted to cram in as much STUFF as possible to make me feel less like a Polish immigrant. There is great comfort in STUFF. Unfortunately, there is also great weight in STUFF, to the tune of a $200 excess baggage fee (thanks Dad!).

My last week was, truly, one of the best in my life. I’m not sure whether it was that feeling of ‘last chances’ and things ending and whatever, but it was fantastic. Going out for coffee, meeting friends for lunch and dinner, going out for more coffee, spending one last day in my glorious Sydney with Helen and Kim, popping round friends’ places, indulging in one last festival (Blues and Roots in Katoomba. I was a doe-eyed fan who demanded a picture with one of my new favourite indie-pop lovelies, Cloud Control…), going out for more coffee and throwing one huge British-themed Bon Voyage. Thanks so much for the Union Jack cake decorated with blue and red berries, Sophie and Sieg!

One thing I know I’ll miss, apart from all of you, is barrelling along in my little white car with the windows rolled down, the sun on my arms and FBi blaring songs of soul-wrenching joy at offensive volumes.

I had planned to dedicate at least 1/7 of the first flight to bursts of sobbing and long melancholic stares out of the window, but this depressing goal was cut short by the arrival of Carmen – a 50 something Aussie lady returning to her job in London. She was lovely: vibrant and enthusiastic with a side salad of eccentricity. Oh, and incredibly talkative. By the time the little white aeroplane symbol on the big blue map was hovering somewhere over Uluru, we’d already covered family, friends, fashion, men, life histories, and travel ambitions. After a short hiatus to discuss the ins-and-outs of our poached pear crumble with questionable custard dessert, we moved on to religion, coffee and music.

All of this talking combined with about 2.6 seconds of sleep in 14 hours meant that by the time we reached Abu Dhabi International Airport (colloquially known as ‘the donut’*), my mind had the consistency of a peach that’s been kicking around at the back of the fridge for about a month and a half.

* A note on ‘the donut’: it is called that because of its interesting architectural style: small and round with a big ‘dip’ coming down from the roof like one big dollop of icing sliding down the donut hole. The ceilings and floors are all decorated with green, blue and white mosaic tiles (if we follow the donut analogy, it is like the sprinkles are on the inside). 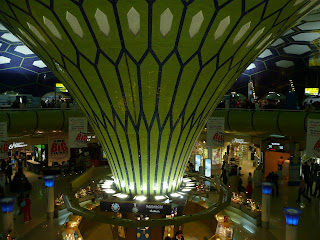 Anyways, my month-old peach mind was rapidly decomposing. Even a desperate attempt to revive it with The Besnard Lakes and The Black Kids was met with a peachy yawn. As I boarded the next plane, I was honestly hoping to be seated next to a weary and dishevelled traveller who would exchange the necessary niceties and then bury themselves in their fully illustrated copy of ‘The Hungry Caterpillar’. Instead, I was parked next to Chatty McFascist and his tirade of dire predictions. This white-haired Englishman somehow lassoed me into a political discussion, and his views were – to use one of Dad’s favourite phrases – slightly to the right of Hitler. Apparently my leftist views are merely a symptom of my youth and naivety. Once I become older and wiser the natural progression is towards conservatism. Once I ‘grow up’ I’ll realise that, as an individual, I will never make any impact on the world whatsoever. Maggie Thatcher and Ronald Reagan were more ‘visionary’ than Gogh Whitlam, and the apology Kevin Rudd finally delivered to Aboriginal Australians was an exercise in the absurd. Where will it end? Should the French apologise for invading England in 1066?

My mind may have been like the mushy peas we were served with breakfast, but I managed to stammer something about idealism being distinct from naivety and a fervent certainty that, for me at least, the process of ‘growing up’ will NOT see me reject my leftist views. I think I even managed to throw in a quote from Abraham Lincoln to cement my position. Or maybe I’m making that up. I probably quoted Big Bird and provided a penetrating philosophical discourse on the importance of the number 3.

Mr ‘I Want to Have Reagan’s Babies’ was possibly more chatty than Carmen, and much less interested in listening. Even when I was squishing the orange ear-plugs into my ears after telling him I was ready for a sleep, he kept right on with the avalanche of pessimism, happy to keep going whether my eyes were open or not.

Anyways, I’ve made it here, and will obviously have to learn how to reign in my verbosity at some point in the near future. I might explain some more about my arrival and my first encounter with London ‘intersections’ later, but in the meantime, I’m here, I’m poor and I’m looking for work. Once I have a job, I’ll probably feel less guilty about dedicating so much time to writing meaningless crap. Then the floodgates can open! I’m sure you’re all really looking forward to it…

P.S. The full title for this blog was meant to be: A Travel Blog of Proustian Proportions
(in which Sarah will detail, in characteristically overblown fashion (but hopefully ever-increasing levels of enthralling wit and self-effacement coupled with a pinch of pathos and a dash of the surreal) her travel tales beginning in this hodge-podge of a city: London)). Funnily enough, it wouldn't fit.
Posted by Sarah at 10:34 7 comments: