As obvious as it may be to write about the tube in London, as a daily user with multiple interchanges requiring multiple trudging up escalators, multiple shoulder-barges from people walking in the opposite direction and multiple invasions of personal space from multiple men who submerged their clothes in eau de Lynx body spray that morning, there are a few observations I have to make.

Firstly, I’ve decided that I much prefer the trains equipped with vertical poles to hang on to than the ones with horizontal poles that run down the length of the ceiling. Although the horizontal poles seem more efficient because more people can hold onto them and you don’t have the issue of vertical pole-koalas (the ones who decide it is necessary for them not just to hold the pole with their hand, but to wrap their whole body around it, leaving everyone else to try their best with empty space or the surprised earlobe of the businessman next to them), when you have a sadistic tube driver who applies the brakes at unexpected staccato intervals throughout clear stretches of tunnel and pushes down rather too forcefully when coming to a complete stop, the horizontal pole proves how useless it really is: somehow our feet lose all ability to grip the ground, and we clang into each other like hanging salamis in an unusually windy butcher’s shop.

Secondly, I have learned that you must treat each peak-hour overground train as if you are an arrogant world-class boxer: forget everything you ever learned about sportsmanship or sympathy for your peers; talk yourself up inside your head, and when the time comes, knock down anyone and everyone who stands in the way of that golden championship belt (AKA a spot on the 7.45am Westbound train). If you don’t you’ll end up scuffing your shoes back on the platform, watching the yellow and purple carriage fade into the distance and thinking about the sliver of space between the fat lady and the Rastafarian that was rightfully yours but conquered by the guy who, having long ago abandoned any sense of chivalry or the natural British inclination to queue, showed up at the last second and stole it in a blaze of elbows and laptop bags.


Leaving London, if only for a day

It only took almost four months, but I finally managed to break free from the tupperware container of yesterday’s spiced-vegetable Biryani that is London and make my way to ‘mysterious’ Stonehenge and ‘city-of-the-multiple-pig-statues’: Bath.

I say ‘mysterious’ Stonehenge because, on the one day when gloomy English weather may actually have been helpful in mustering up those ‘what’s it all about?’ sort of sentiments that are meant to burst naturally from your pores upon visiting something built around 1500BC, the weather was so perfect – clouds yawning contentedly in the sky, newborn lambs grazing beside buttercups in nearby meadows, children licking double-decker ice-creams with sprinkles – I could only stand there and say: “Yep, that’s Stonehenge.”

The only ‘mystery’ I encountered all day was why so many Americans come to this country when they expect everything to be the same as ‘back home’. Americans outnumbered every other nationality on the bus about 10:1, and on the hour-long bus trip from London to Stonehenge and then again on the next hour-long leg of the trip from Stonehenge to Bath, the discussions I was forced to listen to consisted mainly of complaints about pitiful portion sizes, pitiful public transport, pitiful trading hours and pitiful customer service. All compared to ‘back home’ where the portion sizes are reasonable, public transport is as smooth as your favourite childhood slippery-dip, trading hours allow you to buy a floral-print sofa and washer-dryer combo at three in the morning, and customer service is such an integral part of the national identity that they’re considering etching ‘The Customer is Always Right’ into Thomas Jefferson’s Mount Rushmore chin.

Peppered amongst the complaints, I also overheard someone asking, in all seriousness, ‘What’s the singular for ‘sheep’?’ and a hearty discussion regarding the horrors of the Australian accent. A portion of it is transcribed here:

“So, I was like dating this guy a while ago, and he was like, so hot, and he was Australian, but I wished I could like plug my ears or something, and just like, look at him instead, because his accent just made me want to barf.”

Never mind that there were at least two Australians on the bus: myself and my friend for the day, Amy from Melbourne. We sat in our orange coach seats, distinguishing ourselves from the Americans by our subtle Australian form of revenge: absorbing all the abuse so we could bitch about it when we were out of earshot.

As for ‘the henge’, there is a thin black rope functioning as a ‘fence’ around the stones and people shuffle up, take their photos, stare at the crows squabbling on the rocks for a bit, and then shuffle back off to join the queue for the toilets. There were audio guides available, but I was happy just to say, ‘Yep, that’s Stonehenge’, do my lap of contemplation and obligatory jumping tourist shot (below) and then shuffle off to poke around all the ingenious Stonehenge memorabilia in the gift shop. Amy found the ‘Stonehenge Rocks’ slogan utterly hilarious, bless her. 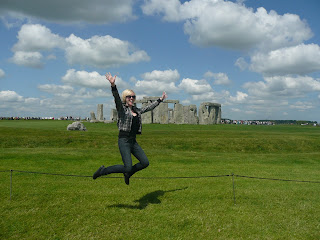 On the way to Bath, I have to tell you, I saw grass like I’ve never seen before. Field after rolling field of most perfectly formed, glossy, plush and gloriously green grass. I wanted to pretend I had an emergency so the bus would stop and I could go throw myself into it. You know how you see something so perfect sometimes and you just want to make a dent in it? Like when you open a new tub of ice-cream and the top is so smooth that you get this sudden urge to stick your finger in? I wanted to destroy this grass. I wanted to leave strange rolling imprints so that planes flying overhead would see an armadillo holding an umbrella that had blown inside out.

Anyways, we arrived in Bath and only had 3 hours to spend there. Should you ever find yourself in Bath with only 3 hours up your sleeve, if you hear about Beckford’s Tower, I strongly recommend taking a bus. Amy and I decided that it couldn’t be that far away, and after a 45 minute uphill walk, we were greeted by the lonely Tower Museum ladies who were mightily impressed we’d walked all the way from Bath. Even Beckford himself rode up on his horse, they said. Which leads to my second recommendation should you ever visit Beckford’s tower: try to arrive with at least a vague understanding of who Beckford was before entering. Of course, it won’t matter if you don’t, because these Museum ladies spoke as if we were two Beckford pilgrims come to lay rhododendrons and coloured beads at his hedonistic feet. They said things like ‘It’s just like him, you know, to have made the stairs to the top so small and easy to climb,’ and ‘Of course he would probably have sat up there pretending that he owned the city – that’s something he would do,’ continually rolling their eyes at the antics of silly old Beckford and remaining oblivious to our glassed-over eyes and polite nodding. 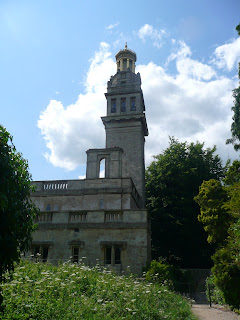 Even though we didn’t have much time left to see the rest of the city, when we came back down from the Tower, we were still too polite to stop the enforced Postgraduate Beckford course that came next. Whether we wanted a museum tour or not didn’t seem to matter. I assume making Beckford Tower bookmarks and tea-cosies all day isn’t the most fulfilling of occupations, so anyone who ventures inside the Beckford walls is a prime target for in-depth tour guiding. I also assume dedicating most of your days to Beckford’s memory can make you a little too obsessed. After enthusiastically taking us over to a glassed-in replica of Fonthill Abbey, where the fabulously wealthy bisexual Beckford spent many years in seclusion after being publicly outed, she leaned in close and pointed to a little grey balcony with a door underneath. “I like to imagine him strolling proud and naked out of this door and going for a swim in the river nearby,” she said.

I loved her enthusiasm, of course, and if I had time I would probably have stayed and indulged her Beckford fantasies further, but we only had about an hour and a half left to see the rest of the city. So we took in the Circus, the Royal Crescent, the Abbey, Pulteney Bridge (which looks more Europe than UK) and bypassed the actual Roman Baths because it cost about £15 to get in. 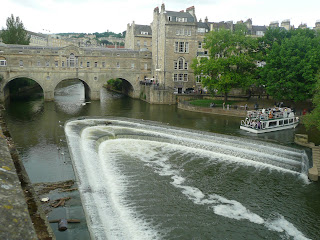 Apart from the Bath stones, which most of the buildings are made out of and make everything look bright and clean, the only other thing we saw a lot of were pig sculptures. Bath must have been having some kind of unadvertised Pig Festival, because sprinkled in unexpected places around the city were these multi-coloured, multimedia Pigs. There were white ones with wings hanging from trees, a silver one with a bow and arrow sitting above the doorway to a coffee shop, a spotty one standing sentry on a street corner, a blue one in the main square, one made out of feathers, one made out of gold mosaic tiles… I read now that they’re there to promote the 3000 year-old legend of Bath’s founder: King Bladud. According to BBC news, King Bladud “discovered the healing powers of its hot spring waters while walking with his swine.” Cool. Any excuse to decorate an entire city with pig statues is fine by me. 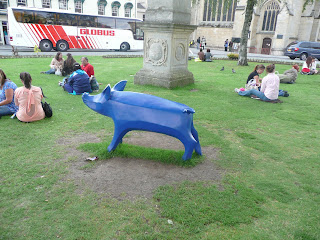