Wouldn't it Be Loverly

I work at a college in central London, where course fees are at a level synonymous with a certain mode of dressing. The idea of 'student discounts' is almost comical when you observe that in this place, the students flounce about in D&G while the staff get by in H&M. Maybe not the staff at the upper echelons of management, who get biscuits in posh individual wrappers rather than a communal platter of Ginger Snaps, but in general, 'the rest of us' do not come from backgrounds that would have allowed us to actually study here.

This month, the students have returned from their summer holidays, so the main quadrangle is again clogged with cigarette smoke emitted by 18 year olds wearing the kind of haute couture you see advertised in Vogue with the guffaw-inducing pricetags. No stumbling out of bed and showing up on campus in pyjama bottoms and a jumper with peanut-butter stains down the front here; these kids stand leaning near the sleek automatic doors in bejewelled jean pockets, massive be-golden-buckled bags, glossy skyscraper heels, suede loafers, silk scarves, cashmere sweaters and blazers made out of the kind of fabric that is too well-heeled to show any inclination towards pilling.

To give an indication of the brand of student that might be found lounging amongst this perfumed platoon, here are two examples:

1. A nineteen year-old Lebanese boy showed up the day before the start of term and said he wanted to enrol. He was told that this was fine but he would have to organise for £13 070 to be paid immediately. He said that that wouldn't be a problem, and casually strolled to the Finance office to arrange it then and there.

2. A girl from India arrived with staff. Her 'people' routinely brought snacks into her during her exams, and when even these banned culinary interjections did not help her to pass, and she was consequently sent packing, her parents pulled out their financial ace-up-the-sleeve and tried to buy her way back in.

Now, when you turn up in the morning and realise that your entire outfit probably cost less than the eyelet on that seventeen year old Italian business student's shoe, it can summon up some pretty visceral reactions. Those of us amongst the 'great unwashed' often huddle together and gossip from the sidelines, our conversations fluctuating between three basic emotions:

1. Disgust. In the fact that we are handcuffed to our desks with only a faux-diamante brooch shaped like a water buffalo and a pocket full of mismatched buttons and paperclips to show for it, when these kids can nip down to Tiffany's and buy a diamond-encrusted buffalo brooch only to discard it the next week for the new trend in bovine accessorising.

2. Envy. That these kids can keep up with trends in bovine accessorising and then pop over to Minsk to pick up some truffles and champagne flutes full of emeralds to distribute to their classmates on a Monday morning. We'd all love to give our friends champagne flutes full of precious stones, too, but through the limitations of our life stations we can usually only offer displays of affection via stick-figure drawings of a guy with his unnaturally long arm around another guy's shoulders, 'me' and 'you' written atop their heads.

3. Pity, or 'poor man's pride'. This usually comes after the 'envy' stage, when we consider the possibility that a stick-figure drawing might actually be more valuable than a glass of gems. Poor man's pride is when you start saying, 'Yes, but they'll never have what we have'; this being a level of street-smarts and common sense that can only be gained through playing fridge-tetris* with your sixteen other flatmates and having fortnightly arguments with the landlord over who should buy a mop.

(*For the uninitiated, fridge-tetris is a fascinating game played in flats where there is one fridge between eight or so people. It is a 'squidgier' and more forceful game than real tetris, and involves a much higher risk of exploding milk cartons and shattered jars of raspberry jam. If you can successfully navigate a little electronic broccoli down the screen and house it snugly between a tower of yoghurts, a pack of cherry tomatoes and a roll of Edam someone brought home from Amsterdam, the fridge bleats out 100 points and then transports you to the next level when you realise you forgot to put in the bouquet of beetroot, the family of kiwifruits and the pack of cumquats you need for your 'beetroot surprise' dessert.)

We twist around between these three emotions, arguing and becoming defensive and angry or serene and philosophical. Some days we simply stand watching in bemused curiousity, eating sunflower seeds and spitting the shells out onto our scuffed Primani boots. But although the dollar signs standing in the quadrangle provide us with daily reminders of our own 'lot', and our conversations about them are as constant as the Russian students' love for test-driving conceptual clothing, I wonder if they ever peer at us through their curtain of cigarette smoke, pondering whether there may be something in these primitive drawings we're always giving to each other.

Books and movies are full of 'fish out of water' scenarios where 'average' people are ushered through secret passageways into sparkling lives full of butlers and their very own fridges, and wealthy people must suddenly come up with new gift-giving ideas (the ol' faithful cup-o-emeralds now out of reach) and find themselves lost in the mire of public transportation systems.

Watching the shimmering society from my sunflower-seeded corner of the quad, I have decided that it is not realistic to wait to be ushered through a secret passageway into caverns of rubies. My workmates and I have employed our fridge-savvy street smarts and come up with a plan. The details are sketchy, but we will steal a few eyelets from Prince Al-Khalifa’s shoes, sell them and then see what it’s like to live the life of a student. 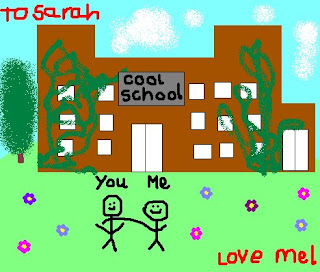