A Llandilo by any other name... 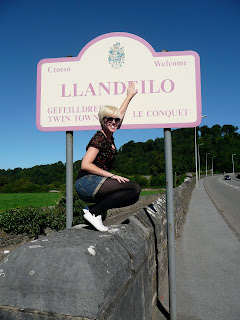 *Although the politics behind this process of renaming a so-called ‘empty’ land is something that makes my heart hurt, writing about it would be another blog in itself, so I will leave it be. I will, however, remind everyone that the original inhabitants of the Australian region that became Llandilo were the Dharug people.
Posted by Sarah at 03:10

Unfair assumptions when you mention your place of origin... The exact reason why nobody knows where I am from ! When people asks me which is my place of origin, I answer "up there" and points behind my right shoulder, waving my hand a little bit.

Even an answer such as "somewhere in Western Europe" is not enough to avoid assumptions. I became such as master at tricking people on that matter, that some of my workmates still believe I was born in South Africa.

Thus being said, I at least am fond of the place I live in, and I should definitely visit Brussels, Illinois/Wisconsin/Ontario/Manitoba...

All those from The Riff, am I right?

I find responding in French tends to shut them up long enough for me to get on with my day.

The confusing part for me is growing up in Camden (NOT New Jersey) and living in Tahmoor, a name you might think redolent of peat and wandering Brontes. Bizarrely, it seems to be an attempt at an indigenous term for "Sod me, but there's vast numbers of pigeons around here" (approximate translation).

Thre's a tawny frogmouth roosting outside our window. It says "oooo" a lot. Beautiful even at two in the morning.

Julien, I guess unfair associations taint almost every place, don't they? I know where you're really from anyway. It rhymes with 'Mile of Dark', right? And, you appear to know my own country better than I do: I've never heard of Madame Brussels in Melbourne...

Sophie, unfortunately after all my French lessons I can only say 'Il pleut comme vache qui pisse’ with any confidence. This is largely courtesy of the French-speaking South African (or is he from Melbourne?), Julien (above).

Monsieur Starkadder, now that you mention it, 'Tahmoor' does sound like a place for wandering Brontës. I like your translation of the name, too. Maybe I'll use that next time I'm at Trafalgar Square.

Oh, and I wish I had a tawny frogmouth roosting outside my window. The only sounds I hear at night are the squeeeeeeeeeeeking brakes and gutteral groans of double-decker buses. I do have some 'wildlife' around though. I found a spider in the bathroom and named him Frank.

This is awesome. I totally know what you mean about feeling that strange sense of comfort at seeing a familiar word, almost like the word itself makes it an extension of home. I admit I sometimes feel that way when passing through 'Canada Water', even though the area is nothing like Canada at all (aside from the fact that there's...water...nearby). But funny how if you pronounced 'Llandilo' the Welsh way back home, everyone would just think you were choking on something!

It is true, Sarah, that unfair assumptions are made upon any place. And as far as I hate assimilating people with their place of birth - and I hate it when people think about me as the Channel Islander of the neighborhood and make supposedly-nice comments such as 'oh I have read an article in the newspaper yesterday about offshore banking on Guernsey, that's almost your place uh, I thought about you immediately" - in the meantime I can't stop my mind from jumping to you anytime something Australian is presented to me - may it be a picture of Julia Gillard or an oceanologist explaining that stingrays are most often found over the shores of Brisbane.

This is certainly because, before I met you, my only direct experience of Australia was renting a videotape of Priscilla Queen of the desert. As a result, you were my introduction to that - oh my, is it a continent or an island ? I always forget. Anyway, I would not have heard about Madame Brussels and the Principalty of Hutt River if it weren't you and your lovely face.

Well, Kate Bush already introduced me to the aboriginal dreamtime, but no woman would ever match Kate Bush, you know that, don't you ?

"best known for being on the way to somewhere else"

I now pass it going to Penrith once a week and only just noticed the sign on my last visit. I was under the impression you lived in Penrith, as I'm sure your sister says you do for the same reasons you did.

What an amazing story, right down to the shopkeeping couple!

There is a little hilltop town in Italy called Bovino, which is my surname, and, at some point in my life, I'd love to visit it for that same feeling you've described.

You're a very funny, talented writer. I look forward to your next blog!

Linds, yeah I had a feeling a dodgy stop on the DLR wouldn't have many similarities with the real Canada. You know how sometimes you look at a tube map and see a station you never noticed before? I think Canada Water was one of those for me once, like West Silvertown or Cyprus.

Julien, it's the same with Sabah. Whenever the papers dissect the political situation in Sabah I always think about you. You are a Sabahian, after all, right? Am I getting closer?

Jay, why thanks! Yes, we've always told everyone we were from Penrith because it was easier that way. Just like 'Vienne' is easier to say than our actual surname...

I'm sure you'll make it to Bovino one day, and you'll take just as many cheesy pictures of yourself posing underneath the 'Bovino' township sign as I did with the Llandilo one. I hope the sun is smashing down in Italy when you go to visit, too, as it did for me in Wales.

Oh I am so moved that you think about me anytime Sabah is mentioned in the news ! And it happens quite often indeed, with all these linguistic problems in Sabah, the game of cat-and-mice between political parties to decide if Sabah will finally have a government or not, and all these assumptions made in the foreign press about the future collapse of Sabah - I think British tabloids often rambles about the fact that 'a Sabahian is now ruling the UK through the European Union'...

If only I were from an Anglophone country...

Great blog Sazza chats! It reminded me of that photo book you made a few years ago with all of the 'iconic' Llandilo images like the Christmas tree farm, the 'piece of cake', the gnarly tree and of course...cows!

As for unfair assumptions, I'm never quite sure how to take it whenever somebody says 'Well you don't seem like you're from Penrith!'

PS : I stated in a previous comment (see above) that no woman would ever match Kate Bush and I just learnt recently that I were wrong. I offer a complete and utter retraction.