Slovenia and the Fear of Squished Mitsubishis

Marc and I went to Slovenia a few weekends ago, and I drove on the wrong side of the road for the first time in my life. By the wrong side I mean the right side, of course, although there are probably a fair few people who would protest at that comment, claiming that the right side is the right side. To me, left is right and right is wrong. For anyone who doesn’t drive, I guess it could be described as like playing a game of poker through a mirror. Not a normal mirror though; a mirror like those theme park ones that are all warped and make you look like you have a really skinny forehead and really fat knees. You remember the rules, but everything is backwards and the cards seem a different size and shape than usual. What’s worst is that you seem to be competing against people who are highly skilled at this mirror card game. They slap down a royal flush in seconds and scowl at you for taking so long to make a move.
We rented the car at a hotel in central Ljubljana, and there was no opportunity to practice in a parking lot first. Nope, it was a hill-start off of a ramp into the middle of city traffic. The first thing I did was reach for my seatbelt over the wrong shoulder, and shortly afterwards – through the warped mirror that made me believe that the right hand side of the road was as far away from me as milk is from the front of supermarkets – I clipped a curb and scratched the hubcaps. I could already feel my heartbeat in my fingers, but then we made it onto the motorway and I somehow sidled my way straight into the fast lane. An instant traffic jam swelled behind me as I puttered along at 60kmph in a 130kmph zone. Lights flashed, horns honked.
Now, there are times when you can talk yourself out of panic, reasoning to yourself that you’re just overreacting and it’s not really as bad as all that. But when it feels like you’re driving something the size of a blimp down a space the size of a fingernail clipping, and you’ve got an angry stream of Slovenians overtaking you at 130kmph, shaking their fists and saying things that cause their small children to peer out of the back windows at you as they pass, it’s slightly more difficult to quash the feeling that you’re either about to die and take everyone with you, or that you’re soon to have a squished Mitsubishi, a hefty bill and post-traumatic stress disorder on your hands.
I eventually snailed my way into the outside lane, trying to act as if I wasn’t embarrassed about how panic-stricken I felt. After a few kilometres of motorway, the fireworks stopped exploding in my veins, and the thoughts ‘get out of here!’ and ‘zgvqkjzl zzzvvv’ stopped skipping across my brain. Marc, my non-driving navigator, and Tina, an American Couchsurfer along for the ride to Piran, did their best to calm me down by letting me know that I didn’t need to make any turns or fear any roundabouts for at least half an hour. There was nothing but straight road in front of me, and the Slovenian sun was pounding down on a day that had been forecast to rain. I sped up and made my way through the easy curves in the road, and the fear of squishing our Mitsubishi began to subside. My stomach still felt like I’d eaten something a little out of date, and I kept glancing at the gear stick on my right with what some might call an unwarranted amount of trepidation, but I carried on.
On the way to the coast, we stopped at a massive castle built into the side of a cliff: 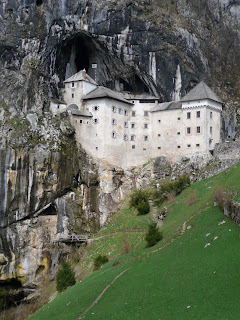 Predjama Castle, Slovenia
and went on a tour of the UNESCO-listed Škocjan caves. I don’t have a picture of the caves, but they were absolutely gobsmacking. Bulbous yellow stalagmites were hunched around the cave floor like giants embarrassed about the state of their skin, and dagger-like stalactites poured menacingly down from the ceiling the way they do in particularly difficult Super Nintendo games. After weaving our way through the silent drippy bits we made it to perhaps the most impressive part of all: a cavern the size of a football stadium with a rampaging river fizzing away thousands of feet below. Actually, my skills of guesstimating when it comes to distance are pretty inaccurate, and the whole cavern was only lit by these tiny little lamps perched on the edges of the safety rails, so it could have been anywhere between eight feet and three thousand, but however far down it was, it made me feel very small.
I’m happy to report that we made it to both the castle and the cave without further hubcap scratches or panic attacks. I realised at some point that I wasn’t using the rear-view mirror at all, but by the time we parked the car for the last time that day, I felt like I was beginning to get used to this mirror poker game. A tiny seed of confidence was sprouting inside of me.
The next morning, however, as we clambered back into the car and Marc showed me the map of our route to Lake Bohinj, my little seed of confidence began to quiver. Apparently I’d agreed to compete in the 2010 Slovenian Mirror Driving Championships: driving up and over the rather daunting Julian Alps.
I forget sometimes that driving can be a psychological experience almost as much as a physical one. Once you know how to drive you don’t think about it anymore, but any learner driver in a manual car will tell you that you have to psych yourself up before you can face a red traffic light balanced on top of a hill. When it came to mirror driving through the Alps, I found myself wishing I had been more emotionally prepared. Driving on the wrong side of the road up a mountain was worse than that first motorway experience. There were hairpin turns, pot-holed roads, no lane markings, snow, steep inclines, old men hobbling along making their way to the next town, and yellow warning signs depicting cars leaning over a precipices with rocks crumbling underneath their tyres. All that might have been manageable if it didn’t seem like there was only room for one car along those two-way mountain passes, and if all the locals weren’t blazing through there as if they were high school bullies who’d seen my ridiculous sprout of confidence and decided it was time to try out their new weed killer. I’d tried to work my way up into the pros too fast, and these guys reminded me that I was still an amateur, shaking in my boots as the masters zoomed on by. I literally flinched whenever another car approached, and pulled over again and again to let tail-gaters pass. My driving was fine (if a little slow): it was mainly my mind that was letting me down.
I gathered from Marc’s appreciative outbursts that the scenery we were driving through was spectacular, but I was too busy clenching my teeth and fearing each bend in the road lest it reveal a speeding truck or a group of adventurous children on bicycles to spare a glance at the snow-topped peaks and sprawling valleys. To his credit, Marc was very patient throughout all of this, offering support and encouragement over the 3 hours it took to make it to our next destination. I was probably overreacting by coming to a dead stop when cars approached from the opposite direction, but as a non-driver, he kept his mouth shut.
In the end we made it to Lake Bohinj and then all the way through to Lake Bled with both the car and my nerves intact. Getting back onto a motorway was actually a relief after far too many sightings of those ominous yellow signs with cars falling over cliff edges.
I don’t think I could say that I achieved a gold medal in the 2010 Slovenian Mirror Driving Championships, but at the least I should get a dinky trophy for participating. I’m probably the mirror driving equivalent of Eric Moussambani at the 2000 Sydney Olympics: just giving it a go even though we don’t really have the right equipment for this sort of thing where I’m from.
In a strange way it did sort of feel like I’d succeeded; that I’d actually accomplished something. I had crossed the Alps without toppling over the edge or decimating any groups of cycling children. By the time we returned the car to the hotel in Ljubljana I could change gears using my right hand as if I’d been doing it for at least two days. We weren’t even charged for the hubcap scratches.
The only issue with this re-sprouting of my seed of confidence is that Marc has cottoned onto it. He is already scouring maps of Europe looking for higher mountains, dodgier roads and the largest populations of retirees who enjoy ambling along cliff tops after lunch. If the end destination is anything like Lake Bled, though, I think I might be tempted to try my amateurish hand at this poker game again: 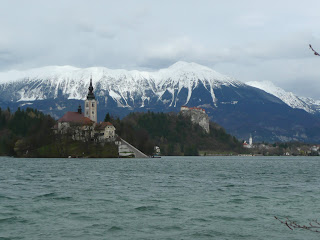 I laughed - a lot! Laura and I felt the same way navigating London traffic - and that was on the same side of the road!

My oh my I never heard of this Predjama Castle before and it is GEORGIOUS ! Just perfect to fulfill my Gormenghastic fantasies ! I should go back to Slovenia just to see it !

Mum, I'm just glad that Slovenian traffic was nothing like London traffic, otherwise I'd probably still be huddled on the side of a mountain road rocking back and forth...

Julien, you should definitely visit the castle. We didn't go inside, so I couldn't see whether the rooms extended for miles into the inside of the mountain, but it looks very Gormenghastic indeed. You could even drive there fearlessly, being the kooky right-hand-side-of-the-road driver that you are...